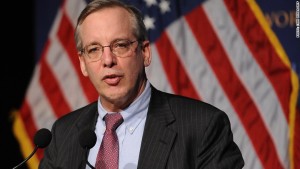 The U.S. dollar fell, once more, in a morning trade in Europe after expectations of a further rise in the U.S. interest rates are unmet. With this, the greenback fell another 0.6 percent to 96.735 making it hit its lowest since early November of last year. On the other hand, Euro harvests its 3-1/2 month high of $1.1192 and is extending its gains from the dollar’s sell-off a day earlier.

According to Richard Benson, head of portfolio management at currency fund Millennium, “The dollar is on its knees. This morning I think it’s just model flow on a lot of technical breaks yesterday. Probably we will now have some stability ahead of U.S. payrolls tomorrow.” His statement was supported by the weak batch of U.S. sentiment data and of New York’s Fed President William Dudley’s warning that a weakening outlook for the global economy should be taken into consideration for upcoming rate decisions.

Aside from Euro, the U.S. dollar also fell off handing most of its gains against yen traded at 117.77 which is 0.1% weaker. This weaker data is a result from the shock cut in Japanese interest rates announced Friday of last week.

Reuters on its Thursday news, February 4, state that “The day’s big set-piece was the Bank of England’s Super Thursday cocktail of a monthly policy decision, meeting minutes and quarterly inflation report. A trimming of growth forecasts and policy maker Ian McCafferty abandoning his vote for a rise in interest rates took the shine off a bullish performance for sterling this week”. With this, the British pound was down against the U.S. dollar to trade at $1.4625 and was down 0.6 percent against the Euro at 76.55 pence. This hits two-week low in the data board after sterling had bounced 5 cents two weeks ago after the U.K. government made a progress in their talks with Brussels.

The abovementioned Sterling loss could jump high 15-20 percent if Britons vote to leave the European Union (EU) as warned by Goldman Sachs. Inflows of foreign investment halt is feared to occur when the said move will be realized.